Update: The Keurig K575 is replaced by a newer model - Keurig K-Elite Coffee Maker and the Keurig K525 is no longer available (discontinued).

If you’re torn between buying the Keurig K525 and K575, then put your mind to rest – you’ve come to the right place.

It’s not surprising to find you here because you’re neither the first, nor the last person to have confused the 2 units.

Keurig seem to have released too many similar models to count, and it’s only reasonable to find consumers confused.

So we took over the task of digging deep into K525 and K575, and shedding some light on their similarities and differences.

Scroll down and figure them all out!

Here is a quick comparison of K525 and K575. I've already written a detailed review on the Keurig K575. 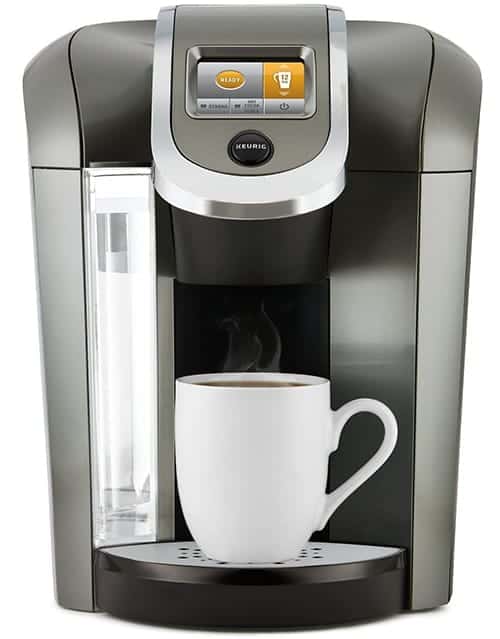 To start off with, let’s have a look at the specs.

On first glance, you may think they’re identical – and you’re right. They actually are exactly the same at 10.4″W x 13.4″D x 13.6″H. The design is no different as well, and they proudly hold the engraved Keurig logo on top.

When it comes to the weight, we were not surprised to find out that they weigh the same too.

The supposedly upgraded K575 brewer shares the same internal components as the K525.

While they’re undeniably beautiful with the newly introduced customizable wallpaper and nightlight settings, they are the same machines in terms of their specs and aesthetics.

Had you ever wondered anything with regards to it, then be rest assured you get the same regardless of which unit you order.

Both K525 and K575 are the farthest a single-serve coffee maker has reached. They can, in fact, brew for multiple people at once. But to do so, you need to purchase a Keurig K-Carafe separately.

They’re indeed compatible with all Keurig K-Cup, K-Mug and K-Carafe varieties. You can test and taste all your favorite pods, not to mention in under a minute.

The speed, coupled with the taste, make the units score high on this area. You can also brew coffee from your own freshly ground coffee, but for this purpose, you need to purchase a reusable filter separately.

All in all, there’s a nary a difference in their performance, leading us to conclude that they are very much the same unit.

Both the units feature the industry’s largest 80-ounce water reservoir. Using this, roughly about 10 cups can be brewed back to back. They’re also removable, so every time you need a refill, you can carry only the reservoir to your sink without a hassle.

A reservoir filled with water will take no longer than a minute to heat up. What’s more, if you change your mind and decide to use the water for something else instead, the brewers allow you to do pour only the hot water out.

The 2.8″ XL color touch display, on the other hand, is found in both the units and is pretty convenient because they’re large and vibrant. This makes operating the machine a child’s play even under low light conditions.

The presence of a digital clock enables the machine to be programmed.

You can set it to wake up even before you do, and have a warm and rich cup of joe ready for you - without even having to lift a finger.

What Sets them Apart

So far, we’ve learnt and compared almost everything there is to learn and compare about these brewers and found no difference at all.

Does that mean they’re identical?

Yes they are! Then why did Keurig market them separately?

Because they simply wanted to sell a water filter starter kit!

In fact, the water filter starter kit is included only in the package of K575 and hence priced relatively higher than that of K525.

So as a buyer, it’s in your hand to weigh the need for a water filter against the difference in price between the Keurig K525 and Keurig K575.

If you already have a water filter with you, even if it isn’t charcoal, then splurging on K575 wouldn’t be necessary.

Even if you don’t have a filter, try comparing the price of charcoal filter and the additional price of K575 before you place a buy.